PREV
BACK TO ALL ARTICLES

Brad Porter (Flexible Workspace Founder) is an intrepid entrepreneur, humanitarian, cyclist and surfer with a love for life and an opinion for just about anything close to his heart. Thank heaven for this blog which gives him a platform to speak out about the typical issues South Africans face on a daily basis while providing some useful survival tips along the way.

Through innovation, technology and our people-first approach, our aim is to establish ourselves as the market leader in the serviced office industry in South Africa.

Our commitment to transparency and service excellence drives us to give of our best to our customers and business partners.

We are enthusiastic and passionate about our business and we have aligned ourselves with partners who support our vision and share our values.

Imagine your work life in another hemisphere. The northern hemisphere is typically a very different way of life compared with the southern hemisphere but consider the difference in what your working life would be from North to South.

From the clothes one wears, to the cost of living, to the expectation of work and the climate, the South definitely gives the North a run for it’s money on the work front. 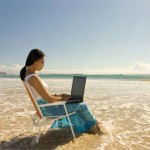 The North, mainly due to its climate and over population in major cities doesn’t allow for this. Most of the time one is limited to working indoors due to the cold. In winter it is dark on the way to and from work and you’re more than likely stuck on a tube underground, which creates a rather gloomy atmosphere.

The lifestyle in the South is generally a lot more user friendly. Working outside gives you a certain amount of independence, responsibility and the freedom to move around and work in different locations and who wouldn’t want that.You can work in summer dresses/shorts on the beachfront overlooking the most magnificent view, or simply sit in a garden absorbing the sun while working from a laptop.

No matter which way you chose to spend your working week a lot of usfortunate enough to live in the Southern hemisphere have the choice to work indoors or outdoors and what a fantastic option that is!

Transform (or be transformed)

Conventional or serviced, that is the question?

Conventional or serviced, that is the question? With property and space related costs ever on the increase and being fuelled further by the rising cost of fossil fuels (electricity and petrol/diesel) finding the right solution for your business is becoming increasingly important. Luckily businesses are spoilt for choice these days with options ranging from remote…

How to Create Employee Responsibility

As a manager or a business owner, there are an overbearing amount of tasks and responsibilities that never seem to end. In most cases we see many managers having to micromanage or babysit their employees in order to make sure that they are doing their jobs, and doing them competently. You think to yourself, “surely…