PREV
BACK TO ALL ARTICLES

Brad Porter (Flexible Workspace Founder) is an intrepid entrepreneur, humanitarian, cyclist and surfer with a love for life and an opinion for just about anything close to his heart. Thank heaven for this blog which gives him a platform to speak out about the typical issues South Africans face on a daily basis while providing some useful survival tips along the way.

Through innovation, technology and our people-first approach, our aim is to establish ourselves as the market leader in the serviced office industry in South Africa.

Our commitment to transparency and service excellence drives us to give of our best to our customers and business partners.

We are enthusiastic and passionate about our business and we have aligned ourselves with partners who support our vision and share our values.

When Darby Architects was approached to envisage a space for the serviced office space provider Flexible Workspace, one objective became apparent to owner, Nick Darby. How was one to create a single interior design concept that would demonstrate a compatible, user friendly and universal style of architecture.

The challenge was neither easy nor simple, which Nick believes is the reason most experienced serviced office providers stick to more neutral and generic palettes. 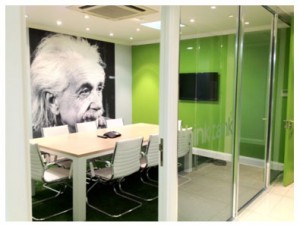 Such an adopted technique is “in keeping with a style, or rather lack of style, that doesn’t announce much prejudice or preference to a particular style or design philosophy” Says Darby. Does this stance make office space easier to sell by leaving the style to the user was one of the questions asked?

The design direction was to be rooted in the company’s corporate ideals. The owner and designer were to dig deep in revitalising or re-interpreting what the company ultimately stood for. Furthermore what would revolutionise the space making it memorable. Through a creative process many ideas were brainstormed and allowed to gel and what resulted were the 3 core principles and values that the business is founded on – fresh, green and exciting.

Darby had this to say about the values;

“Fresh – By introducing light, bright colour palettes to instigate a freshness to the spaces that can become deep and dark within the wide office floor plates, relying less on artificial lighting. The existing blue carpets were retained and dividing office partitions given a light blue to grey tinge to contextualise the walls with the carpet and promote a coolness in an otherwise dry and hot Sandton business district. Existing beech-wood door architraves painted white to continue the freshness and glass water bottles in glass fronted mini-fridges instigated at the entrance foyer giving the user an added coolness and sense of ease to the functionality of the space.”

“Green – Single tone walls in green to create an accent to each office symbolising the environmentally friendly approach of the company and adding to the bright, cheerfulness of the space. Green doors provide the same effect while breaking the monotony of long corridors. An elaborate use of plants to the entrance reception emphasizes the concept quite literally with a forest-like lushness to the main entrance.”

“Exciting – The use of graphic wallpapers was proposed to the ends of corridors to create pictoral stimulation and work effectively acting as focal points at the ends during circulation through the office space. Einstein portaits to the main boardroom space create a sense of intellectuality and ‘out-the-box’ thinking, encouraging companies to spring into action with initiative and rejuvenation. Inspiring quotes to the entrance reception columns for a sense of patriotism, good fortune and positivity with Nelson Mandela and Albert Einstein quotations to wallpaper cladding around structural columns. Instead of typical building regulation requirements to add patterned glass stickers for visual safety, eccentric labelling was considered on meeting room and boardroom glass partitions with titles such as ‘Think-pads’ and ‘Think-tanks’ respectively to add to the creativity and enthusiasm, while at the same time suggesting the use of white ink pens to write on the glass for note taking or pictoral demonstrations during meetings. A reflective, polished silver aluminium frame was considered for the glass partitions to add to the sense of exuberance and sophistication of the reception area.”

In essence the hope was that the design would succeed in providing an inspirational place to work that is in keeping with both Flexible Workspace’s generous approach to space as well as having an appeal to most business users. Bradley Porter, Founding member of Flexible Workspace agrees saying 85% of people that have toured the Sandton offices say they like what they see which goes to show applying some simple inspiration and attitude to your space inevitably puts you at an advantage.

Transform (or be transformed)

Conventional or serviced, that is the question?

Conventional or serviced, that is the question? With property and space related costs ever on the increase and being fuelled further by the rising cost of fossil fuels (electricity and petrol/diesel) finding the right solution for your business is becoming increasingly important. Luckily businesses are spoilt for choice these days with options ranging from remote…

How to Create Employee Responsibility

As a manager or a business owner, there are an overbearing amount of tasks and responsibilities that never seem to end. In most cases we see many managers having to micromanage or babysit their employees in order to make sure that they are doing their jobs, and doing them competently. You think to yourself, “surely…